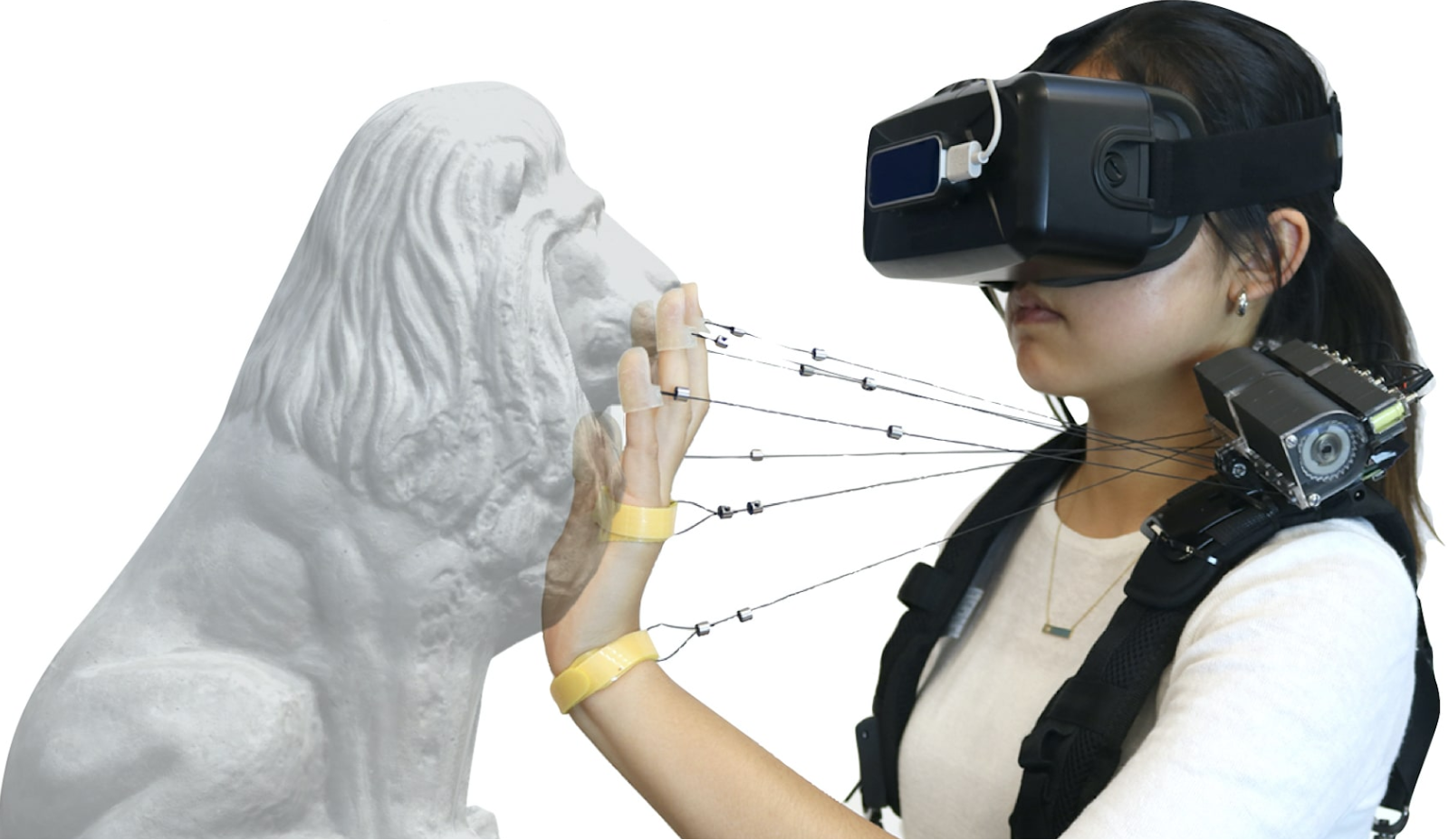 By James Bourne | 7th May 2020 | TechForge Media https://www.cloudcomputing-news.net/
Categories: Devices, Hardware, Platforms, Research,
James has a passion for how technologies influence business and has several Mobile World Congress events under his belt. James has interviewed a variety of leading figures in his career, from former Mafia boss Michael Franzese, to Steve Wozniak, and Jean Michel Jarre. James can be found tweeting at @James_T_Bourne.

Virtual reality (VR) is able to create stunning immersive visual experiences – yet they remain an alternative dimension, with the user experience somewhat obtrusive. Research into haptics – the area of interaction between virtual and physical forms – is ongoing. Yet new research from Carnegie Mellon University (CMU) has aimed to unlock the challenge of simulating touch in VR.

The device uses multiple strings attached to the hand and fingers to simulate the feel of obstacles and objects. “By locking the strings when the user’s hand is near a virtual wall, for instance, the device simulates the sense of touching the wall,” the university explained. “The string mechanism enables people to feel the contours of a virtual sculpture, sense resistance when they push on a piece of furniture, or even give a high five to a virtual character.”

The shoulder-mounted device looks to take advantage of spring-loaded strings to lessen weight, consume minimal battery power, and maintain low cost. This compares with other haptic techniques whereby strings were used, with motors deployed to control them. The CMU researchers wanted to move away from this method, looking towards a system which was unobtrusive and affordable.

The device, which weighs less than 10 ounces, could cost as little as $50 in a mass-produced form, with user testing, according to the team, finding the device was more realistic than other methods.

Amid the Covid-19 pandemic, virtual reality has been seen as a potential answer for those stuck within their four walls during lockdown phases. The economic impact of the virus, however, has cut a swathe across almost all technology sectors, with VR no different – take Magic Leap’s recent layoffs as an example.

While some initiatives have proved a major success – the city of Helsinki recently put together a ‘VR gig’ with more than half a million virtual attendees – other industry opinion has been cool on the subject. Writing for the New York Times last week, Kevin Roose noted a conflict between the potential for escapism and the traditional bugaboo of hardware user experience. “After several weeks of testing, I suspect that the future of lifelike digital interactions will not be found inside VR headsets and computerised goggles, but instead will be built on top of the less flashy technology we’re already using,” Roose wrote.

Some are taking a more optimistic approach. Forbes writer Joe Parlock, albeit taking more of a gaming-focused view – an area which Roose admits is strong – argued that the comparisons are apples against oranges when it came to VR’s limitations. “We don’t argue that flight sims are dead because most people don’t build a plane cockpit in their garage to play them,” he wrote. “VR is a hobby, one that is adjacent to mainstream gaming, and it doesn’t need to meet arbitrary goals comparative to flat gaming to be considered successful.”

What may have made the Helsinki concert experience so good, as the Guardian’s Sarah Baxter notes, is that there was no headset required – and that through Virtual Helsinki, the Finnish capital’s digital twin, initiatives would naturally be at a more advanced stage.

This makes for an interesting analysis when considering the CMU research. Anything which maintains, or even enhances, usability, while limiting clunkiness, has been a goal of the wider wearable technology industry for some time. Whoever gets it right may well be onto a major winner.

You can find out more about the CMU project by visiting here.