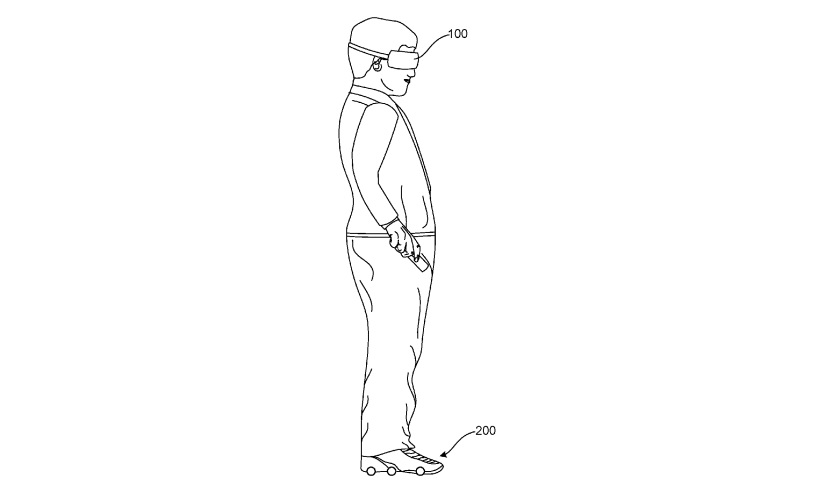 By James Bourne | 20th November 2018 | TechForge Media https://www.cloudcomputing-news.net/
Categories: Devices, Hardware,
James has a passion for how technologies influence business and has several Mobile World Congress events under his belt. James has interviewed a variety of leading figures in his career, from former Mafia boss Michael Franzese, to Steve Wozniak, and Jean Michel Jarre. James can be found tweeting at @James_T_Bourne.

Google has submitted patent documents for ‘augmented and/or virtual reality footwear’ – in a potential attempt to solve a key problem with VR around locomotion.

When does a VR world become truly virtual? Of course, put a headset on and you are in a virtual world, but you cannot walk about in it – at least not very far until reality kicks in. Google’s patent aims to enable what they describe as ‘seemingly endless’ walking in a virtual environment, with motors and wheels in the footwear keeping balance and the user remaining still.

Sounds simple enough, doesn’t it? The primary issue with VR, or omnidirectional treadmills, is that the user often has to be strapped into it, or have an object in close proximity to hang on to, to stop falling over. Google aims to change this – assuming the patent filing goes any further

The issue of how users interact with their environment has been tackled in the past outside of footwear. Ultrahaptics, a UK-headquartered company, is plotting a future course through ultrasound where users feel sensations through the air, while HaptX, based in Seattle, is looking at how users can feel virtual objects more realistically through its gloves development kit.

You can take a look at the full patent document here.