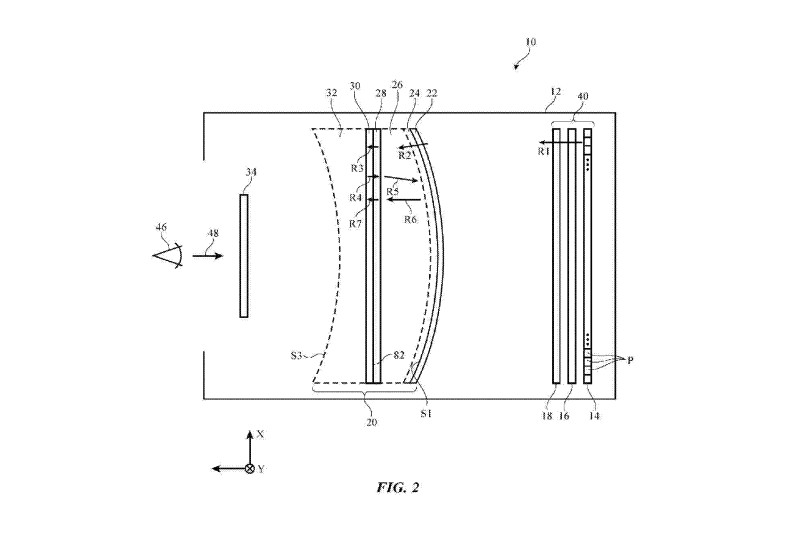 By Colm Hebblethwaite | 13th February 2018 | VR 360 https://www.virtualreality-news.net/
Categories: AR, Hardware,
Colm is the editor of VR 360, with a mission to bring the most important developments in technology to both businesses and consumers.

Anticipation continues to bubble about Apple’s rumoured entry into the AR hardware market. The tech giant’s experiments with the technology are common knowledge, but a new patent filing has shed more light on what direction might take.

Last week, Apple applied for a patent for a “head-mounted display” which may include a “display system and an optical system”. The device uses a “catadioptric system” that utilises curved mirrors and lenses to both reflect and refract light.

This means that Apple would not need the magnifying lenses used in most VR headsets.

Another noteworthy feature of the proposed headset is its lighter weight than most other headsets. The company states that head-mounted displays can be “cumbersome and tiring to wear” and that extended use may make such systems uncomfortable.

The focus on a lighter weight marks a clear indication of what Apple sees as problem with its rival’s offerings and a way of differentiating itself in the mind of consumers.

While the patent application gives eager Apple fans an indication of how the company is thinking about AR, there is no guarantee that the company will actually build this device.

The industry expectations are currently that Apple won’t be launching any AR hardware until at least 2019. While this would make it a relatively late entrant into the market compared to its main rivals, the company always the potential to spark consumer interest in ways that other companies don’t.

The proposed headset would also be fitted with ambient light sensors, and the filing also mentions trackpad controls.

It is unclear whether all of these features will make it into the final headset. What is clear though, is that Apple is planning on making a big impact in the fledgling AR hardware market.