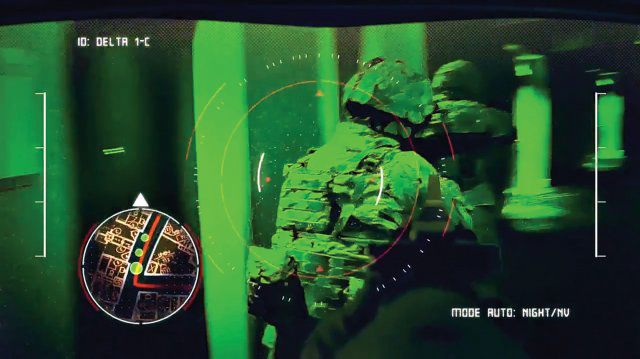 By Colm Hebblethwaite | 4th April 2018 | VR 360 https://www.virtualreality-news.net/
Categories: AR,
Colm is the editor of VR 360, with a mission to bring the most important developments in technology to both businesses and consumers.

The US Army is set to begin testing an AR system called HUD 3.0 sometime in 2019, according to a report in Breaking Defense.

The HUD 3.0 system reportedly consists of a helmet-mounted system that projects a range of different information onto a soldier’s field of view. The concept is based on the heads-up display currently utilised on fighter planes, which was introduced in the late 1970s.

The kind of information that would be shown to soldiers using the system would be their location in relation to the rest of their unit and their enemy. The system will be able to superimpose purely digital terrain, including potential obstacles.

The key pain points that an AR system could eliminate would be the continued reliance on physical maps and compasses in order to determine an individual’s location. A secondary benefit would be speeding up the information-gathering process, allowing soldiers to make and enact plans faster and more efficiently.

The HUD 3.0 is the evolution of a project that started with the introduction of the HUD 1.0, which is the Enhanced Night Vision Googles III. HUD 1.0 is a weapon-mounted thermal sight that projects the weapon’s field of view onto a helmet mounted view. This allows the soldier to fire from behind cover.

According to Breaking Defense, there will be no HUD 2.0 as the technological leap that AR provides means that the Army is going to skip straight to 3.0.

HUD 3.0 is being created in conjunction with an unnamed industry partner. The challenges of the system are going to be trying to ensure that soldiers are not bombarded with unnecessary information, or that their field of vision is compromised. Another unique requirement of applications for use by the military is that they need to be able to withstands rigorous use in the field.